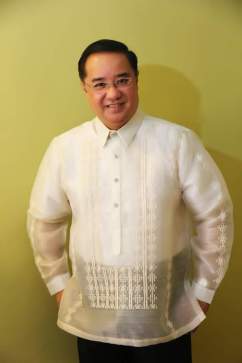 “The IFBA has created a Biosafety Heroes program to identify and celebrate extraordinary individuals who make significant contributions to help others in the field of biosafety and biosecurity. IFBA Biosafety Heroes are exceptional and inspiring individuals honored by the global biosafety community as having made a difference for the better. Biosafety Heroes serve as role models, showing others that each individual is important and can contribute to the global fight against infectious diseases. Awards are given at IFBA or member association meetings.” Accessed at http://www.internationalbiosafety.org/index.php/programs-activities/programs-activities/biosafety-heroes.

Dr. Moreno has been advocating Biosafety, Biosecurity and Biorisk Management since 2008 as the Founding Secretary of the Philippine Biosafety & Biosecurity Association. In 2011, he graduated as one of the first 19 Certified Biosafety Professionals in the country as granted by the U.S. Department of State-BEP and UP-NIH. Later that same year, he established and implemented the Laboratory Biosafety Program for the St. Luke’s Medical Center (SLMC) Research and Biotechnology Division (R&B). In mid-2014, he transferred from R&B to St. Luke’s Quality and Patient Safety as the Department Manager handling Risk Management (Biorisks), where he started implementing the same laboratory biosafety program at the Institute of Pathology in both SLMC Quezon City and Global City. In late 2014, the Philippine Association of Medical Technologists Inc. tagged him to announce in their 50th Annual National Convention a challenge to get PAMET involved in biosafety. PAMET took his challenge and, in February 2015, he was tagged as the PAMET biosafety point-person, giving him access to PAMET members, with advocacy now covering more than 94% of all laboratory workers nationwide. It was in early 2016 when he was appointed Chair of the SLMC Institutional Biosafety Committee and Biosafety Officer by the SLMC President and CEO. Dr. Moreno at this same time founded the Biological Risk Association Philippines (BRAP) where in less than 7 months, under his leadership, BRAP has assisted in paving the way to draft the Philippines’s Biological Materials of Concern List, created Technical Working Groups to Strengthen Networking in Biosafety and Biosecurity and Personnel Reliability Program nationwide, advocated Biosafety and Biosecurity in 7 PAMET Regional Conferences, 9 Chapter Conferences and conducted a Biorisk Management Workshop with the biggest pre-conference attendance in PAMET’s history.

Daydreamer
View all posts by arielaquino →
This entry was posted in News and Updates. Bookmark the permalink.