Below is the letter of Ms. Maureen Ellis, Executive Director of the International Federation of Biosafety Associations (IFBA) re: the Publication of ISO 35001: The Biorisk Management Standard.

The IFBA is pleased to announce the recent publication of the new ISO 35001: Biorisk management for laboratories and other related organizations. 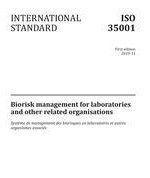 We would like to thank members of Technical Committee 212 and stakeholders from around the world who provided valuable guidance and input into the development of this important standard. 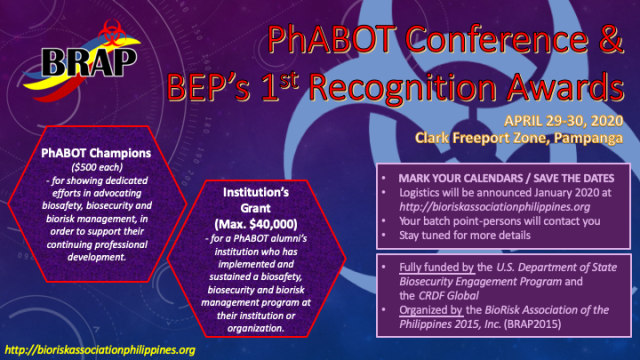 In BRAP’s effort to create a single-focus understanding and strengthening of the best practices for a safe and secure specimen transport in the country, we initially centered on Mindanao where the Philippine Association of Medical Technologists (PAMET) has a solid stronghold on almost all laboratorians who are members of their association. We invited most of the PAMET chapter presidents from Mindanao and also one representing North and Central Luzon, one representing South Luzon and one representing the Visayas regions. We had a participant representing an airline and 2 representing a courier company.

Before the actual lecture, a scenario was presented to the participants involving a picture of a damaged package. Participants were asked to examine and determine reasons that lead to such problem and were presented before the body. This was discussed intensively by Dr. Leila Florento, Chair of the Department of Health’s National Reference Laboratory Network. This stimulated some participants to give their own experiences. The module was moderated by Prof. Gertrude Garcia of Xavier University. Participants had a free long discussion on their personal experiences, which was similar to the scenario presented. Couriers stated that most laboratorians just handed the packages to them without proper instructions on what it was and how to send it. Some couriers said that they just accepted the package for transport since the other courier who was IATA (International Air Transport Association) certified rejected it because of improper packaging. These carriers on the other hand said they accepted the package because there was no other courier to send it to but them. And to them it was just another business achievement. One organizer, Ms. Katrina Sanvictores told everyone her recent personal experience being asked by the laboratorian to bring 2 unlabeled test tubes to another hospital who will perform the test being requested. Fortunately, she knew which test tube was from the right lung and from the left.

Dr. Florento reiterated the main purpose and benefits of the training on handling, packaging, and transport of biological specimens. Principles of biosafety and biosecurity were reviewed. Key components of risk management were also presented and reviewed. A new biorisk management strategy based on AMP model, from the WHO Laboratory Biosafety Manual, 4th Edition (in Press) was and presented discussed.  The 8 new pillars of laboratory biosecurity were identified giving emphasis on transport control. Transport principles and the “chain of custody” were also emphasized. Discussion on the overview of shipping and introduction on the 7 steps of shipping were presented and discussed extensively.

Professor Oliver Shane Dumaoal, PAMET Regional Director for South Luzon gave a lecture on Module 2A1. Participants were taught on how to identify relevant international and regional regulations pertaining to the transport of biological materials and to identify existing local regulations pertaining to the transport and importation of biological materials. Also discussed was how to identify risks of each type or class of dangerous goods. Most importantly, participants learned that all international guidelines and model regulations are harmonized regardless on how the way dangerous goods are transferred by air, road, rail or sea.

The next topic was about IATA’s classification of dangerous goods discussed by PAMET President Mr. Ronaldo E. Puno. There were 9 classes of dangerous goods presented, but much discussion was placed on class 6 for it deals with the toxic and infectious substances. This class 6 was further categorized into categories A and B. Specific definitions were given on each item, and the lists of categories on infectious substances were also discussed. To assess the participants understanding on this topic, they were given group exercises on how to classify and categorized the given substances. Participants were also taught on how to assign proper shipping names and UN ID numbers according to the category that substance is classified. Time was allotted mostly on hands-on of the participants and how they individually explained what they were doing.

Module 2B was discussed by BRAP President Dr. Miguel Martin Moreno. The topic was about correct packaging instructions using IATA guidelines. Participants were also taught on how to identify and use correct marks and labels using IATA guidelines. Dr. Moreno used the official training kit from IATA which was BRAPs property and used in the annual conferences of BRAP. Participants had a chance to practice handling and packaging the test tubes supposedly carrying the biological specimens. They were given several exercises and case scenarios on how to go about with the proper packaging and labelling prior transport. The participants were very lively and participative in all the given exercises, and obviously learned well in this activity.

The second day of training started at exactly 8am. Mr. Plebeian Medina, a certified IATA Trainor from the Research Institute for Tropical Medicine was the first to give his lecture. The session started with an activity where participants, divided into three groups, were given keywords to classify by posting these on the wall under the choices: (1) category A; (2) category B; (3) exempt human/animals and (4) not regulated. After the participants finished posting, the speaker corrected the errors and explained extensively where the keywords were supposedly posted. Questions and verifying concerns were asked by the participants and the discussion extended to the hour of the next lecturer.

For another group activity, the couriers were separated from the carriers and from the laboratorians, creating three groups each. Every group presented the Philippine way of packaging, which was realistic and was currently in practice. The couriers discussed the wrong steps being practiced from specimen reception to delivery of package to the appropriate receiver. Dr. Marie France Jalao acted as main moderator, while all other speakers commented on every wrong detail. The correct safe and secure way of handling to packaging and finally to transport was discussed and explained in detail.

Mr. Larry Jay Langaman, PAMET Regional Director for Mindanao, gave a lecture on the general methods of transport, i.e., being delivered by courier and delivery by non-courier. He compared this with the practice of the Department of Health and the National Reference Laboratory Network all over the country. Being part of the network, he emphasized that our workshop modules had the same topics and materials as discussed in the government-led 2-day workshop.

Participants were given scenarios in module 4, which was more on role playing facilitated by Dr. Gina Itchon and Dr. Miguel Martin Moreno, regarding safe and secure handling, packaging and transport of laboratory specimens. The participants demonstrated in front of the group how they pack the specimen from the scenario given using real IATA certified boxes provided by BRAP.

Participants also learned about spillage and leakage scenarios in the lab while with the couriers or during in flight with the airline carriers as discussed by Dr. Jose Obedencio Jr in that module. He stated that handlers must develop spill response plans and that spills should be dealt with immediately. A workflow was presented to us which is notify, protect, confine, clean up, dispose, and then report. Participants were also reminded that personal exposure takes priority over clean up.

Participants were also taught what a spill kit is and that it should contain the following: PPEs, disposal lab gown, paper towel/absorbents, freshly prepared 10% NaHCl3/approved disinfectant, biohazard bags, sharp container, forceps/tongs, broom and pan, and warning signs. They were also informed that there are two types of spills: major spill and minor spill. A spill is considered major if the spill is more than 50 mL and is greater than 1 foot in diameter. Also, if the extent is undetermined and involves an agent transmitted by aerosol and may require assistance from a hazmat team. Any spill lesser is considered to be a minor one.

Emphasis was placed on the anatomy of a spill: a bulk liquid, with small splashes, and aerosols. The response in case of a spill are as follows: notify supervisor and personnel, restrict the area, get the spill kit and don PPEs, place absorbent materials over the spill covering twice of its area, spray/pour disinfectant from outside inwards and allow to soak for 15–30 minutes depending on viscosity, remove the absorbent material using a forcep or tongs and throw in the biohazard bag, wipe remaining residues, remove gloves and other PPEs, wash hands and report to supervisor.

Participants were also shown how to correctly don and doff their PPE and perform double gloving properly. Important step discussed in detail was: if the spill is on the body, remove contaminated clothing immediately and dispose of properly keeping in mind the universal precaution, vigorously wash the area contaminated, obtain medical attention if necessary, and then report to supervisor immediately.

Special cases were also pointed out such as environmental factors, organic materials, sharps, and dried spills. The speaker also noted that we should not attempt to open a leaking package. The shipper should be notified immediately and then inspect the other packages for leaks and contamination. Report to hazmat team if the spill is unmanageable.

BRAP organizers would like to thank BEP, HSP and all the resource speakers and especially the participants who made this training a huge success. Thank you for your inputs: Prof. Edison Ramos (Module 1), Ms. Rosario Barrido (Module 2), Ms. Jocelyn Recabo (Module 3) and Mr. Ronnel S. Mabasa (Modules 4 and 5). Thank you to the Mindanao PAMET Chapter presidents for your enthusiasm in attending. Thank you to the Chair of the Department of Health’s National Reference Laboratory Network, Dr. Leila Florento for allowing BRAP to use this module, to our Copy Editor Mr. Ariel Angelo Aquino, and to Mr. Larry Jay Langaman, Mindanao PAMET Regional Director, for the Mindanao logistics and especially capturing our audience. And especially to Ms. Katrina B. Sanvictores, BRAP Coordinator for Special Projects for that magic touch.