In August 2014 the University of Bradford was awarded a project grant for the development of a resource for promoting biological security education globally. The project is jointly funded by the Governments of Canada and the UK under the Global Partnership against the Spread of Weapons of Mass Destruction.

Throughout the course of 2015, two authoritative books on biological security education have been produced. The books are primarily aimed at undergraduates studying life science courses and their lecturers, but it is hoped that the material will be useful to scientists at any stage of their career.

The new books produced by disarmament experts at Bradford and from around the world are designed to help scientists understand how their important, benignly-intended work may be misused by others in a hostile way, and give them guidance on how they can prevent this.

The first book titled ‘Preventing Biological Threats: What you can do’ provides an overview of the potential biological threats from States and sub-State groups and what States, organisations, scientists, and the international community as a whole are doing, and can do, to deal with such threats. The second book, ‘Biological Security Education Handbook: The Power of Team-Based Learning’ seeks to facilitate the dissemination of training content by offering guidance on how to design Team-Based Learning seminars and training courses, in order to involve groups of scientists at all levels in discussion of these issues and what can be done to prevent the potential threats.

The two books were launched together at a Side Event, on 15 December 2015, chaired by the UK Ambassador, Matthew Rowland, at the Meeting of States Parties to the Biological and Toxin Weapons Convention at the Palais des Nations in Geneva. 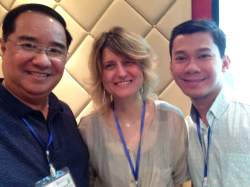 Download ‘Preventing Biological Threats: What you can do’ (intended to raise awareness and knowledge of biological security of everyone active in the life sciences, ranging from those engaged in research to those engaged in management and policy-making, both nationally and internationally) here and its Appendix (Educational and Training Resources, Policy Statements, Reports, and other Documents with Relevance to Biological Security) here.

This entry was posted in References. Bookmark the permalink.